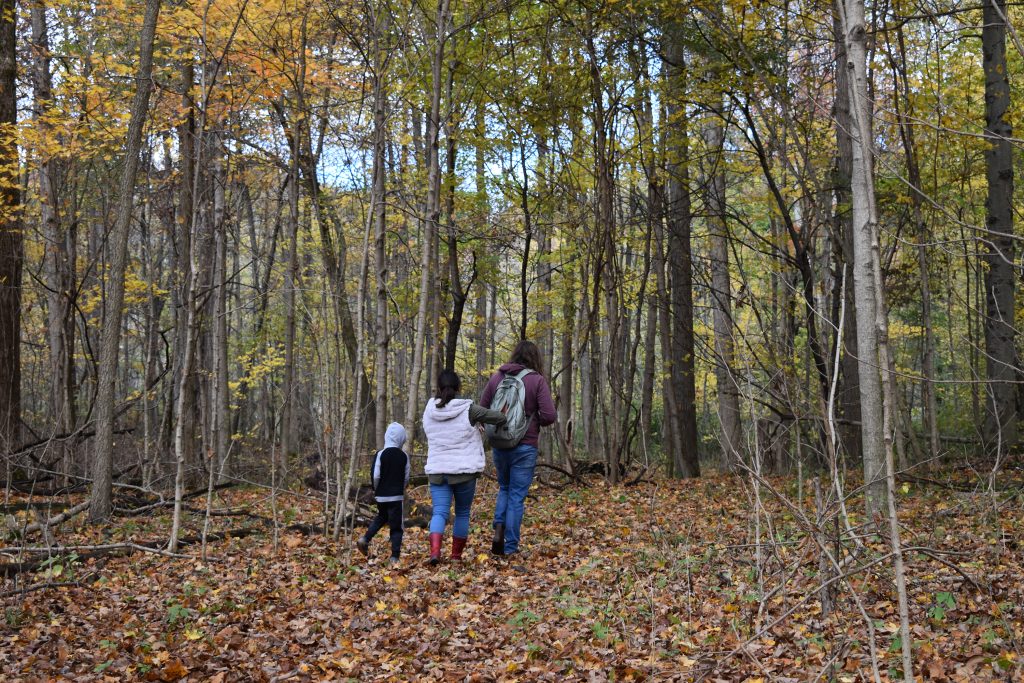 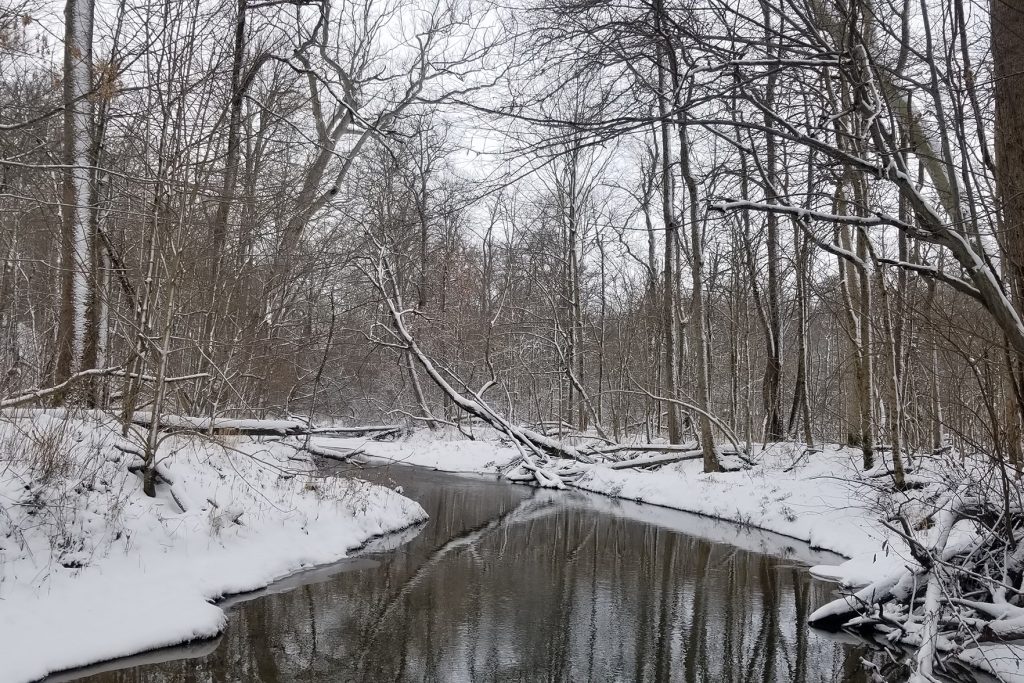 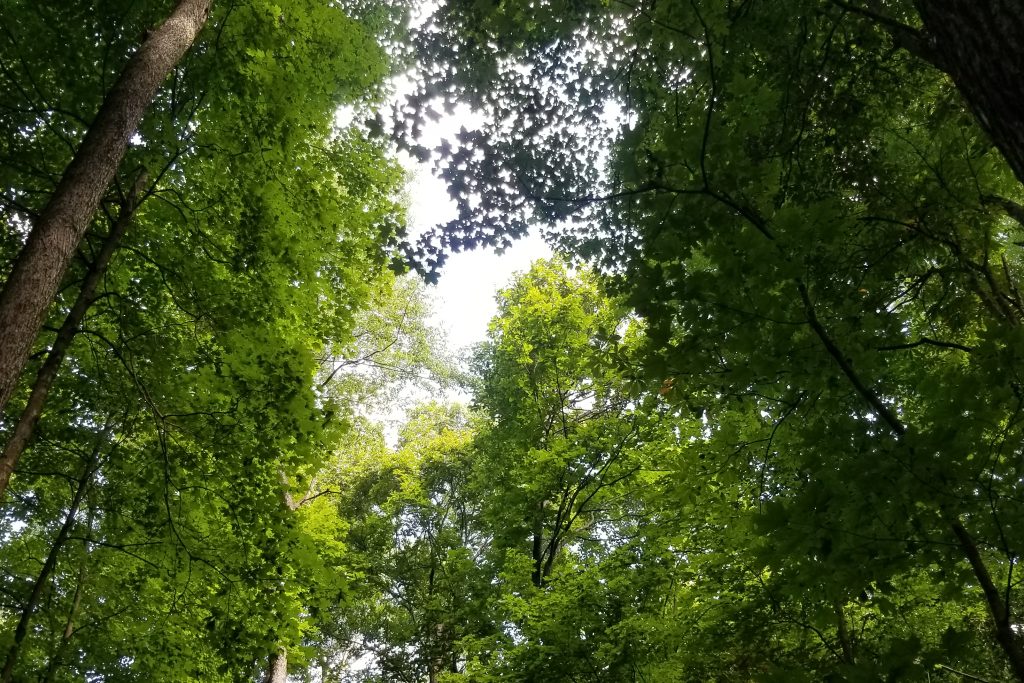 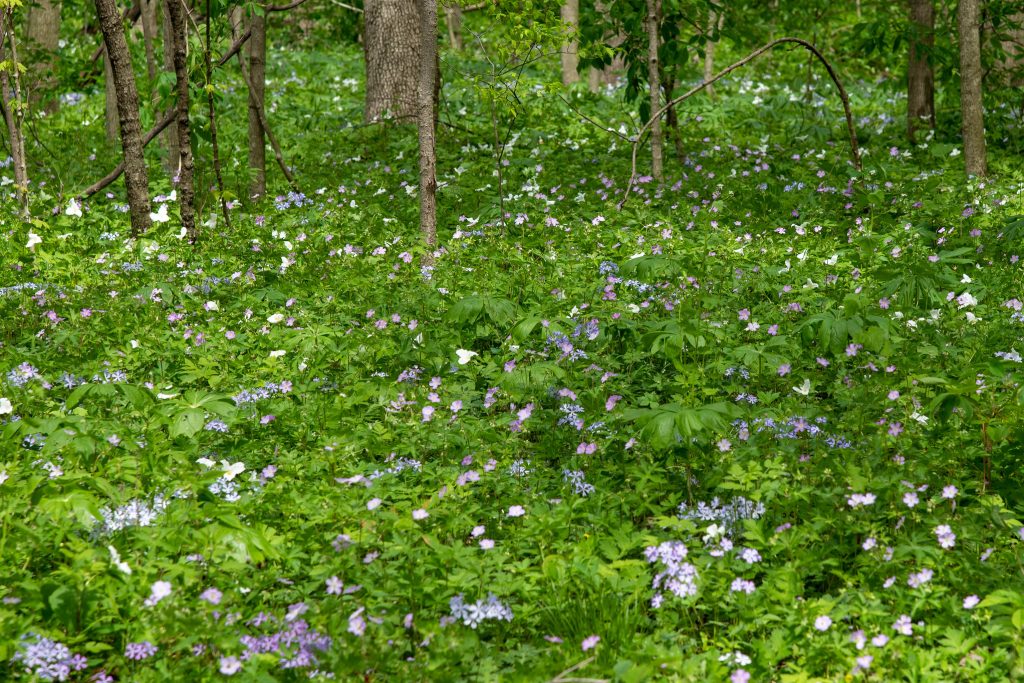 Phyllis and Frank Yuhas Woods is one of the most pristine woodlands in east central Indiana. It features towering old growth oaks, hickories, beech and black cherry trees. The wetland is alive with frogs and colorful salamanders. In the spring, this forest is carpeted in a rainbow of wildflowers. A display seldom found in our region. In autumn, the diverse tree canopy is ablaze with a riot of orange, yellow, and maroon leaves.

This exceptional nature preserve is closed to the public except for a few special events each year. Some of these events are public. Exclusive opportunities to visit Phyllis and Frank Yuhas Woods are sent to supporters subscribed to Red-tail’s email list.

Protecting this high quality forest and wetland had dramatic beginnings.

In November of 2004, Red-tail’s Executive Director received a call from a farmer in southern Randolph County about a 1,000 acre farm that was being auctioned off. This farmer told of a forest covered in white flowers that contained a section of Cabin Creek. Upon inspection, Red-tail discovered one of the highest quality upland woods and riparian wetlands complex in East Central Indiana. This discovery was made just three weeks before the forest was to be auctioned off as part of a farm sale.

Red-tail immediately started pursuing funding for this parcel from national organizations. However, due to lack of an appraisal, time of the year, and other factors, these organizations were unable to procure the funding. Red-tail then went to Star Press writer Seth Slaybaugh, who published the story of the forest on a Monday morning, just eight days before the auction was to take place. That same day, Red-tail received a call from Phyllis Yuhas who, after reading the story, asked to visit the site. During this visit she pledged $200,000 to help purchase the site.

The next day, Red-tail received a call from Danny Huston, who did likewise. Before the end of the week, Doug Owdendy pledged $100,000. This enabled Red-tail to attend the auction with a half a million dollars to purchase this magnificent woodland. In a well-attended auction, Red-tail successfully purchased this site. Once again Red-tail’s reputation as a professional and trustworthy land trust organization brought about the support of the community to preserve this flagship location for Red-tail.

Accessibility: Open for special events only