Fall Webworm Nests Are Not Harmful to Healthy Trees 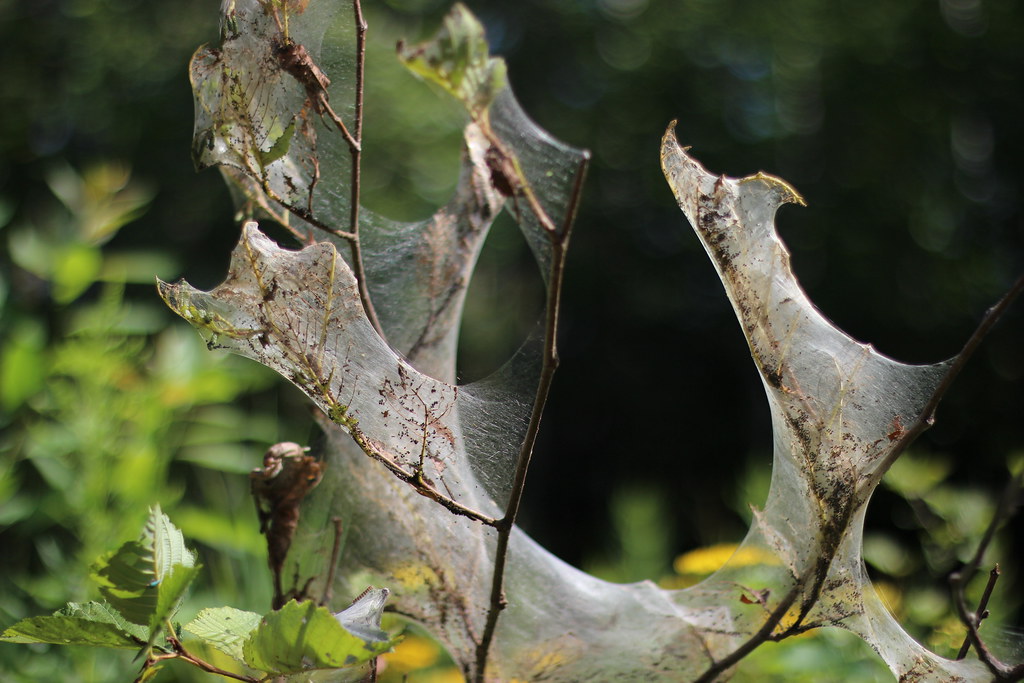 In late summer each year, fall webworms (Hyphantria cunea) become noticeable when they build their highly visible thick white webs on the tips of tree branches. Fall webworms are moths, not worms, though they are generally known for the nests made during their worm-like larval state. While many consider the webbed nests unsightly, fall webworms are not harmful to otherwise healthy trees.

Adult moths lay their eggs on the underside of leaves early in the summer. The webbing is a protective structure produced by the caterpillars. Female moths have been observed to cover their eggs with abdominal hairs as a kind of parental care.

The life cycle of the fall webworm begins when the adult moths hatch from pupa cases that overwinter on the ground or in leaf litter beneath trees. The adults are pure fuzzy white with black antennae in the northern latitudes of its range. They are white with black speckles in the southern part. Fall webworms occur naturally from southern Canada to South America.

The adult moths aren’t too particular about the kind of tree they choose for egg-laying. In fact, the caterpillars use over 90 species of trees throughout the Americas, nut and fruit trees being their perennial favorites. After the caterpillars hatch, they systematically devour every part of the leaf except the veins, enlarging the web as they grow. Fall webworm caterpillars exhibit a rather remarkable behavior; when disturbed, they bob, weave, and jerk in total unison with the others around them. Biologists cannot explain this synchronous behavior.

The temperature inside the webbing varies between 104 to 122 degrees Fahrenheit, allowing the caterpillars to develop more quickly and helping to protect them from predators and disease.

In spite of the alarming appearance of the web, most trees can sustain the damage because the leaves are almost ready to fall anyway. The moths rarely lay their eggs on the same branch or even in the same tree the following year.

If a young tree is infested, fall webworms can almost completely defoliate the tree. In this case it would be desirable to take matters into your own hands (literally). Rather than rushing to the nearest retail pesticide aisle, use a stick to destroy the webbing.

Poking holes in the web allows species of parasitic wasps to invade the web and attack the caterpillars. The wasps deposit their eggs under the caterpillar’s skin, and the young wasps begin to devour the insides of the living caterpillar upon hatching.

These moths are an important food source for birds, bats, spiders, and wasps. Because of their late season hatching, they provide vital sustenance for wildlife that are preparing to hibernate or overwinter.

Fall webworms are native to North America. Like many species of plants and animals, they were accidentally introduced to other countries through global trade. They are now a serious tree pest throughout much of Europe, China, and Japan because they have no natural predators there.

Sheryl Myers taught biology and environmental science for 34 years and has worked as a naturalist for area parks. She is a founding board member of Red-tail Land Conservancy.

Photo by US Fish and Wildlife Midwest Region