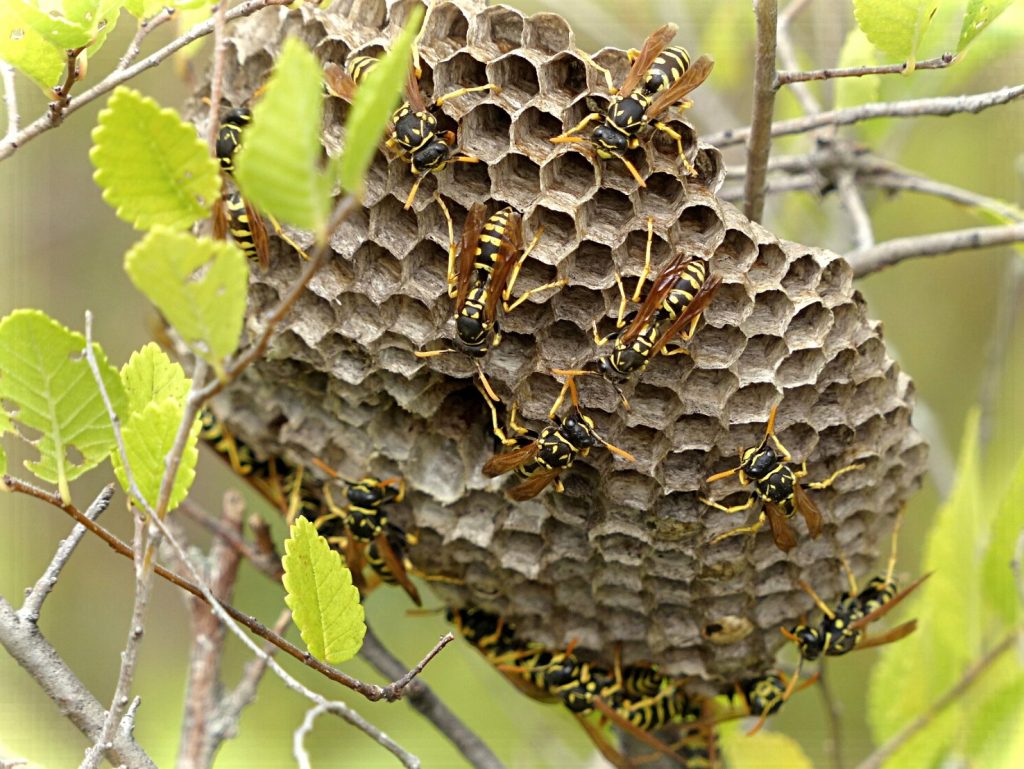 Burgers, potato salad, corn hole and cool beverages: all staples of late summer barbecues and tailgate parties. It’s a great time until the wasps arrive, dive bombing the watermelon and hiding in your soda can.

Burgers, potato salad, corn hole and cool beverages: all staples of late summer barbecues and tailgate parties. It’s a great time until the wasps arrive, dive bombing the watermelon and hiding in your soda can. They can be annoying, their stings are painful, and it is downright scary if you are allergic! But in many ways, they are misunderstood.

Why do they seem to harass us so much in August and September? To figure this out we need to learn a little more about wasps, their life cycle and habits.

Unlike bees which have fuzzy bodies, wasps have thinner, elongated bodies. Bees collect pollen and are critical to our food supply as they are excellent pollinators. In comparison, wasps are insect predators, eating caterpillars, beetles, flies, spiders, and other bugs to feed their larvae.

Though they may seem terrorizing, most wasp species are solitary and do not sting. The mud dauber, for example, builds mud tubes and packs the tubes with spiders. Solitary wasps are extremely helpful to farmers protecting their crops from damaging pests.

Social wasps include paper wasps, hornets, and yellow jackets. All these types of wasp construct their nests from wood fibers which they chew into pulp, mix with their saliva, and mold into paper. Paper wasp nests are open, umbrella shaped structures which they hang off eaves, under tables, or other horizontal structures. Hornets construct large closed nests which often hang from trees. Yellow jackets construct their nests underground, usually in holes made by rodents or moles.

While it may seem unnecessarily vicious, they sting to protect themselves– not to strike fear into passersby. All these social wasps can sting repeatedly to defend their nest or if they feel threatened. Their sting is much more painful than a bee sting. Swatting or killing a wasp will cause it to release a danger pheromone which will signal other wasps to attack.

A new colony is formed each spring. Only the mated queen survives the winter tucked away in a sheltered place. She emerges in spring and lays eggs in a new, small nest. From these eggs a first generation of workers will grow to enlarge the nest. The queen keeps laying eggs all season, while the workers bring back insects to feed the hatching larvae. They are so busy working that they don’t have time to feed themselves.

As the queen lays her last brood of eggs in late summer the workers have little left to do. That’s when they go in search of sugary foods that will give them a boost of energy. Feasting on fermenting apples that have fallen on the ground or sweet barbecue sauce at the tailgate, it is their end of season party before they succumb to the freezing frost.

If the wasp nest is in an area you can avoid, it is best to leave it alone. Be aware that hornet nests may release hundreds of wasps when disturbed. Setting out traps may just lure them to your yard, they can travel over 1/4 mile to find food. When they become a pest at your picnic, try wafting them away rather than swatting at them. If all else fails, put the food away or go inside.  When frost arrives, they will disappear.