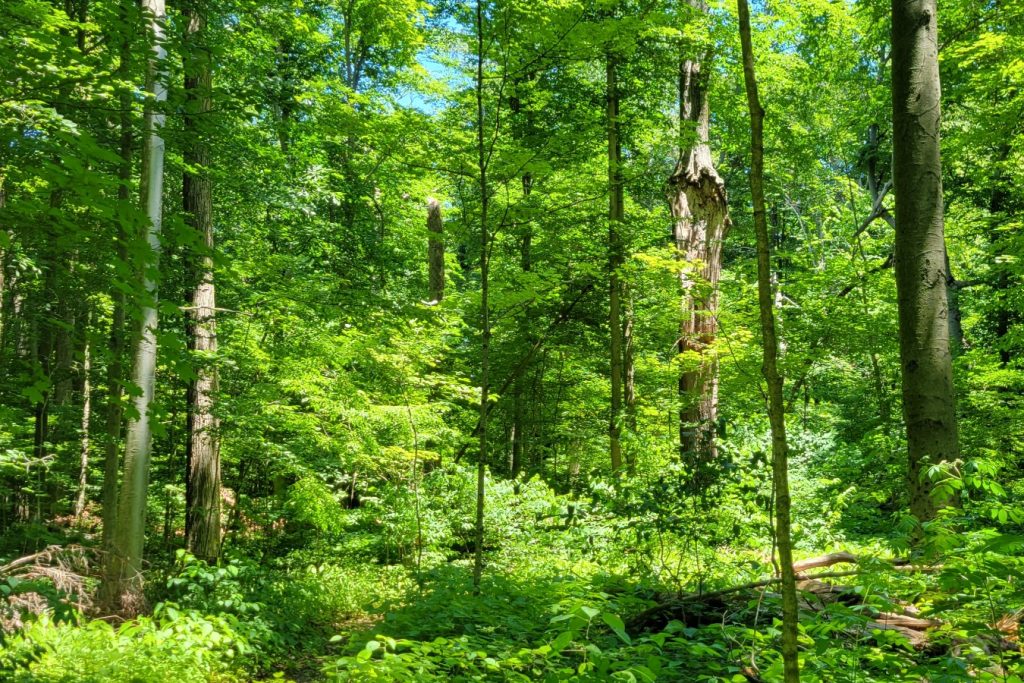 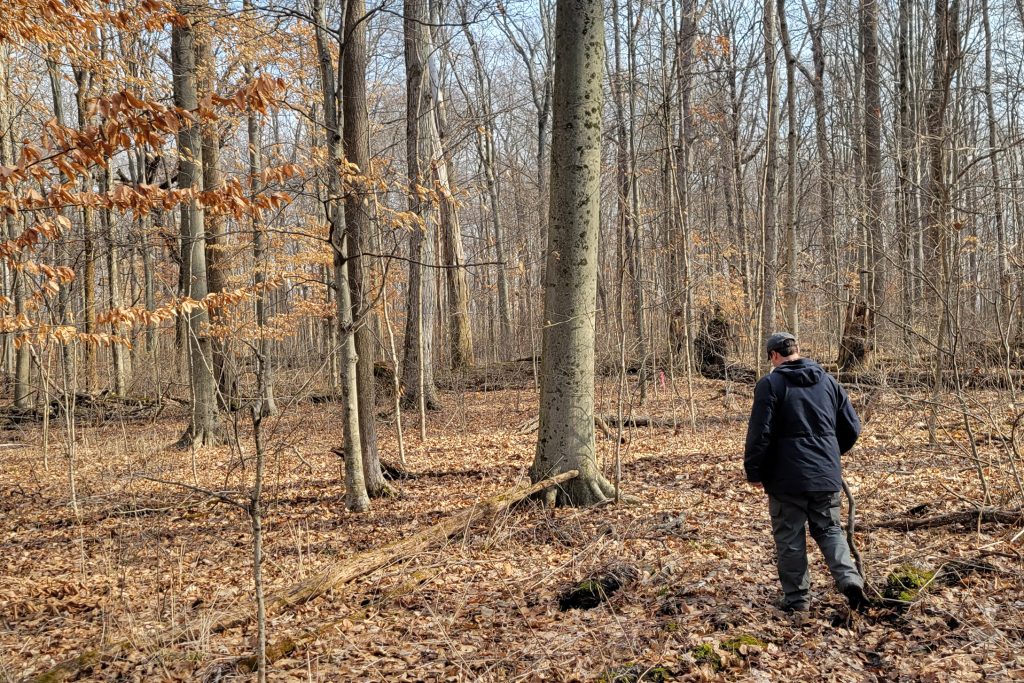 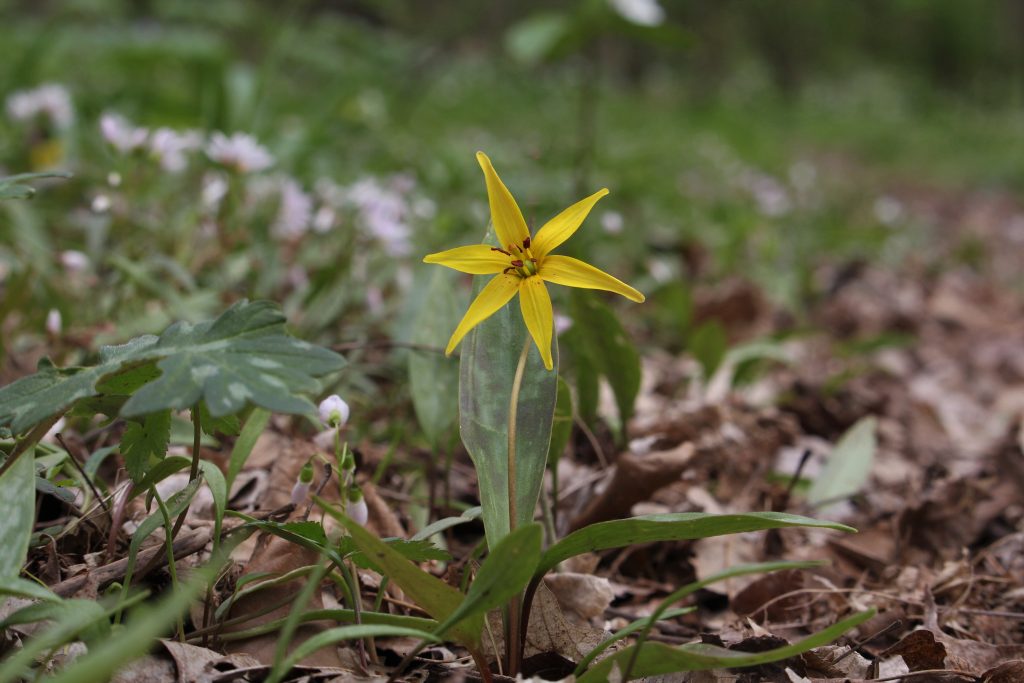 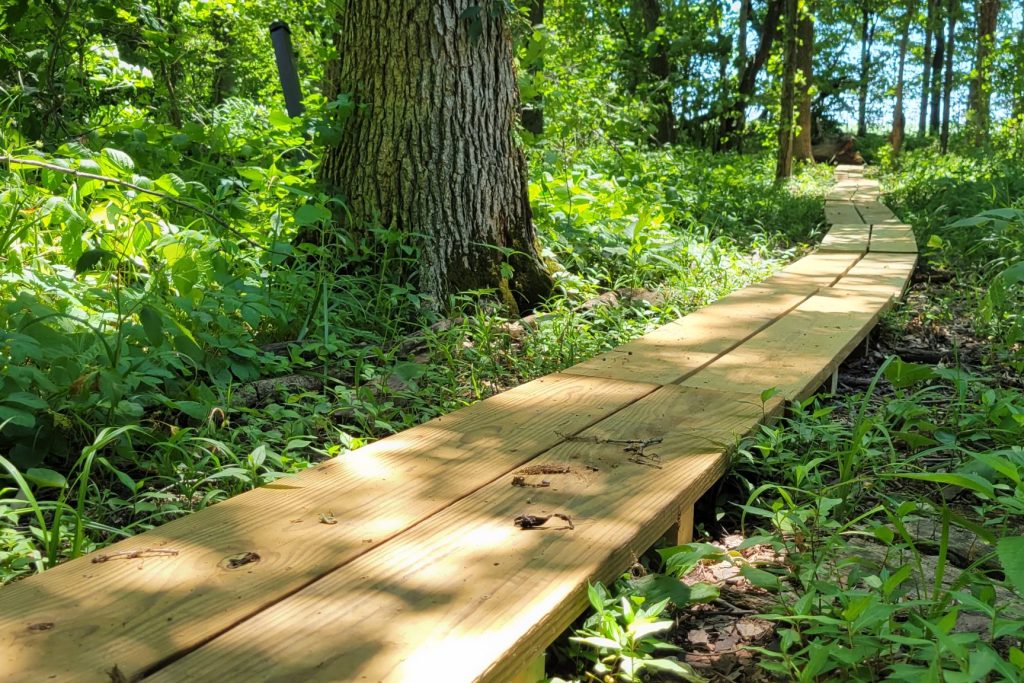 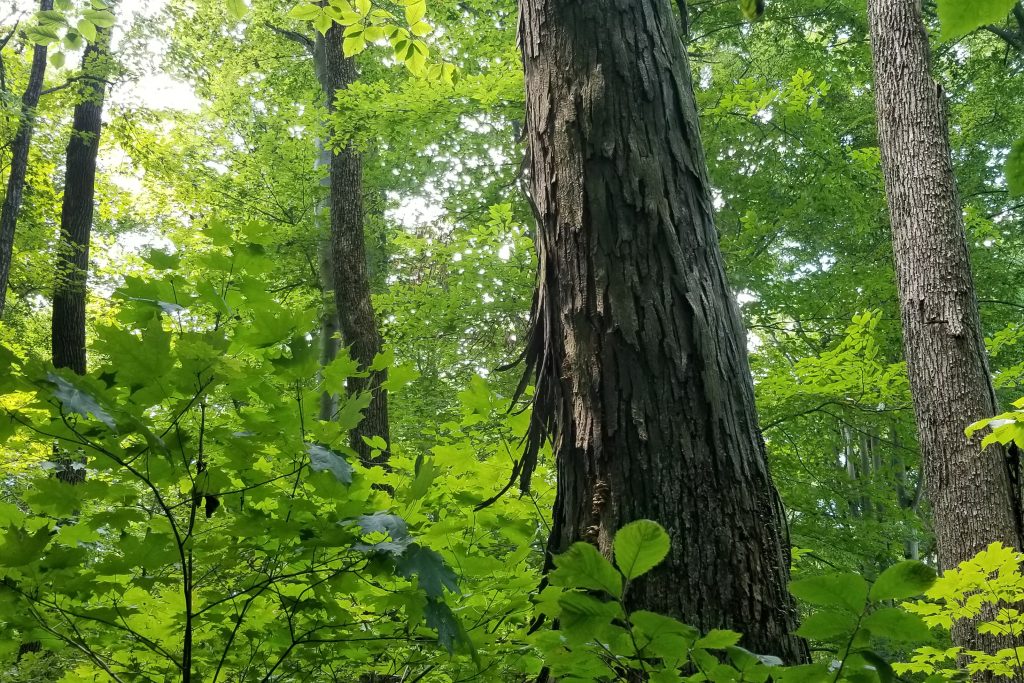 Stout Memorial Woodland is an Indiana dedicated state nature preserve, meaning it is recognized by the state to be an example of the beauty and biodiversity of pre-settlement Indiana. This forest is one of the finest upland hardwood stands in east central Indiana. Stout Memorial Woodland is home to numerous giant hardwood trees including tulip poplar, oak, walnut, maple, and beech. Beautiful throughout all seasons, spring wildflowers and brilliant fall foliage are not to be missed.

A small, gravel parking area for this nature preserve is located off North County Road 300 West. The grassy lane behind the gate is for visitors to access the preserve on foot. After rain, some sections of the trail may be muddy. Boardwalks are located over wet areas.

The history of Stout Memorial Woodland revolves around Sam and Stella Stout and their family whose community spirit and perseverance led to the preservation of one of east central Indiana’s last remaining old growth hardwood forests.

From 1851 to 1875, William Deaver purchased six parcels of land just north of New Castle, Indiana. It was known as Woodland Farm because of the beautiful stands of oaks, walnuts, beech, and other hardwood forest trees. In 1885, Samuel E. Stout, son of Ira Stout and Nancy Jane Deaver, was born as the third generation to own the homestead and care for the woods now known as Stout Memorial Woodland.

Sam spent his childhood and teenage years on the farm. He left home at 18 years old and graduated with a civil engineering degree from Purdue University in 1910.

Over his lifetime, he served as Chief Industrial Engineer at U.S. Steel-American Bridge Division, Chief of Staff of Cook County (Illinois), and Assistant General Manager of Whiting Heavy Equipment Corps. He also did civic planning in communities in Illinois, Indiana, and Kentucky.

In 1928, he moved back to the family farm to follow in the footsteps of his father who was described as a master farmer. In an article by The Farmleaders of Henry County published in 1937, Sam freely admitted to not being as masterful. Instead, he took pride in using the farm as a place to study and experiment with different agricultural methods he saw in the community and during his travels.

In his return to the area, Sam became heavily involved in the Henry County community. He helped organize the Farm Bureau Co-Op, was active in county planning, and a leader in 4-H fairs and education.

Sam and Stella Stout had three daughters who all lived at the farm at some point in their lives: Margaret Ann Stout Ellett, Jane Stout Fribley, and Mary Caroline Stout Mann.

In the many years the Stout Family farmed the land, a 40-acre stand of trees remained untouched. In a letter dated December 10, 1963 to Professor William Bramble, at Purdue University’s Dept. Forestry and Conservation, Sam outlined his desire for it to stay pristine. He wrote, “It is my desire in some way to perpetuate the woods as a native forest and to maintain the same, in a protective and a proper way, as a demonstrative woods and as a place where the public can observe a native woods and its vegetation and animal life in a supervised way.” 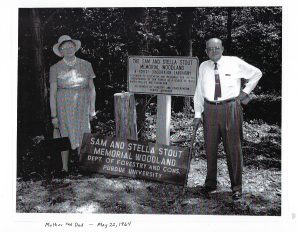 To make that desire come true, Sam and Stella donated the forest to Purdue University on May 22, 1964. At a well-attended ceremony, it was dedicated as the Sam and Stella Stout Memorial Forest. But the gift had specific intent.

One intent behind the donation was for the woods to be used by the Purdue Natural Resources Department to study timber. At the dedication ceremony, Dr. N Kent Ellis of the Indiana Agricultural Experiment Station called the woodland, “a very choice and quality laboratory in which we can do both research and teaching.”

Equally important, Sam and Stella were adamant that the forest be a place for the public, especially youth, to experience the outdoors and learn about natural resources.

Three years after the donation, Sam passed, leaving the farm to Stella. One of their daughters, Margaret Ann Stout Ellett, described her mother as, “managing with keen interest and ability that had lain dormant.” Stella Stout was Chairman of the Republican’s Women’s Club for many years, Board Member of 4-H, a leader in Sulphur Springs literary club, and teacher. Stella Stout passed in 1976.

The farm was awarded the Hoosier Homestead Award in 1990– nearly 137 years to the date of Woodland Farm’s homesteading. The award marks it as being within a single family for over a century.

As time went on, the family had growing concerns that the Purdue Natural Resources Department only used the woods for research that benefited the timber industry and marketplace. One of Sam and Stella Stout’s granddaughters, Peg Sheffield, recalls her mother and aunts saying how important it was for the woods to be used for public education purposes too.

In a letter, Margaret Ann wrote, “Is it not of greater value, to the people now living and to future generations, left in its natural state?”

Peg Sheffield remembers a meeting at Purdue with her Aunt Jane and cousin Marty Mann. She and Marty represented the fifth generation of Stouts and spoke of how important it was to them to protect the woodlands for future generations as their Grandpa Stout desired.

Though the auction was stopped, Sam and Stella’s descendants were still concerned for the forest’s future. In 2000, they began developing partnerships with Red-tail Land Conservancy, Purdue University’s Department of Forestry, Indiana Department of Natural Resources, and Indiana Division of Nature Preserves. After two years of coordination, Stout Memorial Woodland became an Indiana State Dedicated Nature Preserve. While still owned by Purdue University, it was protected in perpetuity to be kept in a natural state and could no longer be logged.

In those years of coordination, Red-tail’s Executive Director at the time, Barry Banks, negotiated a Memorandum of Understanding to actively cooperate in advancing nature and wildlife education programs. Barry led scout troops, school groups, and volunteers to fulfill the spirit of Sam and Stella’s gift for public education and appreciation.

Red-tail fundraised for several years to purchase a 36-acre section of the forest. With monies from the Laura Hale Charitable Trust, Stout Memorial Woodland became Red-tail Land Conservancy’s eighth public nature preserve on March 22, 2013. The official transfer of ownership was just two days from what would have been on Sam Stout’s 128th birthday.

After a visit to the forest, Margaret Ann wrote, “Alongside the entrance was the neat sign reading ‘Sam and Stella Stout Memorial Woodland’… Surely this memorial forest will carry the past and present into the future and our family will live on as a part of this beautiful land.”

As land protected by Red-tail Land Conservancy, Stout Memorial Woodland will be preserved and managed in a natural state forever.

Because of a family’s vision and the vigilance of following generations, Stout Memorial Woodland is a rare place where the public can build deep connections with nature for generations to come.

Thank you to Peg Sheffield and Julie Mann for providing the memories and history to write this memorial.