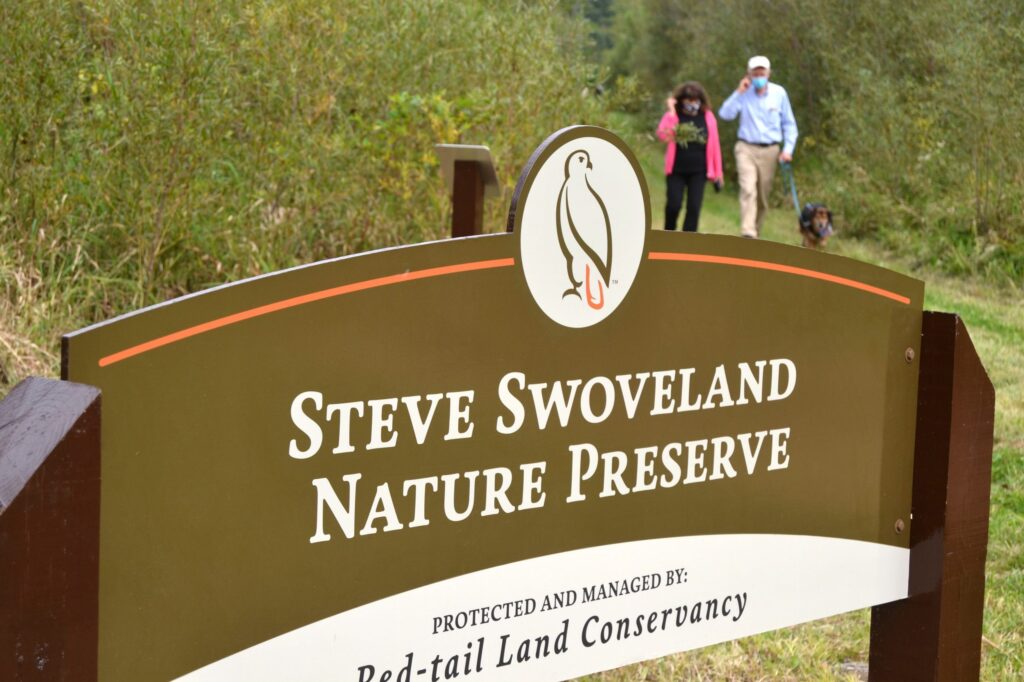 Steve Swoveland was a devoted conservationist, advocate and steward of wetlands–a critical habitat that many don’t understand.

To Steve, a wetland’s beauty is more than rich dark soils and leaves of a thousand green hues. He knew that they are the most important ecosystem for the health of waterways and spent his personal and professional life pursuing their well-being and protection.

A result of that passion was the permanent protection of a 46-acre wetland in Hagerstown, IN.   After an exhausting campaign led by Steve, it was saved in 2001 by Red-tail Land Conservancy from drainage and development. Following his death in November of 2019, Red-tail Land Conservancy’s Board of Directors unanimously voted to rename the wetland he worked to restore and protect. To recognize Steve’s tireless efforts, Hagerstown Nature Preserve will be known as the Steve Swoveland Nature Preserve.

He was born, raised and eventually spent his adult life on the street boarding the preserve. As a child, he would spend hours playing by the creek within, a tributary of the Whitewater River. By the time he was a teenager, he had every trail and tree memorized. Though he spent his childhood exploring the area, he only ever called it, “the wetlands.”

Steve’s affection for the wetlands transformed into a career path. As the first to graduate from Indiana University East with a biology degree from their newly created environmental studies program, he immediately went to work for labs protecting and testing water. His career ultimately led him to a position as Co-Superintendent of New Castle Water Pollution Control. It was a role where he could clean and protect water while sharing the importance of wetlands and aquifers as natural counterparts to manmade systems.

It wasn’t only “the wetlands” Steve advocated for, but all wetlands. Though typically a reserved person, he did not shy from the opportunity to educate those who thought mosquitos were a wetland’s only inhabitants. Especially when he walked with people in the wetlands of his childhood, he became animated and eager to point out the variety of plants and speak to their function.

“I was fortunate to have Steve give me a tour of the nature preserve on a beautiful fall day,” recalls Marty Welch, Steve’s brother-in-law. “As he talked about the plants in their special habitat, his appearance changed as if he had lost a decade in age. I could tell that his connection to the outdoors was a deep and lifelong essential part of him. He felt lucky to have this wonderful place in his backyard.”

In the late ‘90s, the wetlands were purchased by a developer that started to remove native trees. Steve was energized and made it his mission to save the special place. It took years of complex negotiations, but eventually Red-tail Land Conservancy protected the wetlands with the ability to preserve it forever from the threat of future development.

“I saw Steve a few times in the last two years before he died and every time we met he talked about preserving the wetlands behind his home. This was so important to him. He was thrilled when the wetlands were officially preserved by Red-Tail Conservancy. He had a love of birds, nature, and wildlife his whole life,” recounts Heidi Welch, Steve’s sister-in-law.

In the process, Steve befriended Barry Banks, the founding executive director of Red-tail. They both worked tirelessly to restore the wetland to a native state, planting thousands of trees and working many weekends to remove invasive plants. His restoration efforts reached out into the community. He recruited a Boy Scout Troop to help plant trees which had been cleared during the development prior to protection.

While conservation and preservation of the wetlands were of utmost importance to him, he knew that a personal connection to nature inspires long-term stewardship. He worked with children to encourage them to simply pay attention to their surroundings. Steve kept a trail mowed through the preserve to make it easy for people to visit and enjoy. He also brought in land conservation and environmental education partners like Cope Environmental Center. Steve felt that being in nature is the first step to wanting to preserve it.

Jenny Elshtain, Steves’ wife of 30 years, remembers his fondness of outreach. “Steve was usually a withdrawn and private person, but when he took people for walks in the wetlands he was so thoroughly in the moment that even his discomfort in talking in front of others would fade away. He would give very educational walks, speaking about all the different plants and the importance of wetlands. It gave him great joy to be able to share this special place with others.”

Steve was a dedicated environmentalist, committed to protecting all living things. The devotion to caring for his playground, sanctuary and beloved special place is evident in the decades spent making sure it was protected and improving its health. Now, the Steve Swoveland Nature Preserve is a protected place that will support future generations of wildlife, trees and people looking to fall in love with nature. “If Steve were here today,” says Jenny, “I do not think he would hesitate to say that saving this place was his greatest accomplishment in life.”