What Webs They Weave: An Ode to Orb Weavers 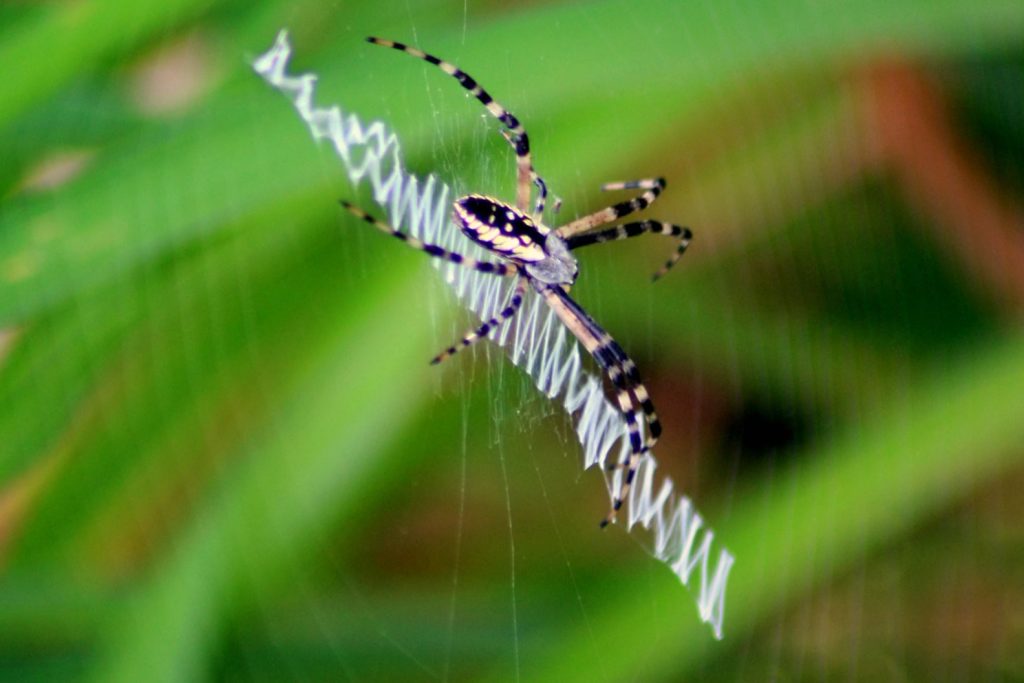 “This is why you had me walk in front of you, isn’t it!?” A phrase you have probably uttered countless times while frantically grasping at silky webs across your face.

That all too familiar declaration while hiking on a trail often accompanies grateful laughter from the people behind you, thanking you for your service as their reluctant spider web shield. Personally, after every webby blindside, I mumble a few questions to myself. Why is it always at face level? Why are there even so many spiders out here? What kind of spiders even do this? All of which can be boiled down to the same answer: orb weavers.

Orb Weavers are mostly members of the spider family Araneidae. The name “orb weaver” refers to the circular-shaped web these spiders construct. It’s often the model for the classic spider web you see in Halloween decor. The ability of their web to absorb the impact of flying insects makes orb weavers some of the most effective insect predators out there. So effective, some high-end estimates date the orb weavers’ first appearance as far back as 265 million years ago! Of course, being such an old group of spiders, some differences are bound to occur.

Micrathena is a genus within the orb weaver family commonly referred to as the spiny orb weavers. True to their name, spiny orb weavers host conspicuous spines on their abdomen. Though these spines most likely evolved to deter predators, most people find these spiders to be quite menacing in appearance. Looks can be deceiving however, as micrathena spiders are very timid and opt to flee over any confrontation. These spiders are some of the most common throughout late summer. While building their webs in forest openings may work well to trap insects, it usually means we run face first into their silken strands while on the trail.

The genus Argiope contains another common orb weaver group, commonly referenced as garden spiders. Much larger than their Micrathena cousins, garden spiders are often overtly adorned with the cautionary colors of yellow, black, orange, and white, but are ultimately harmless to humans. Usually constructing their webs slightly lower and in more open areas, garden spiders sit directly in the center of their web with their legs spread into an “X” waiting for a meal. Thankfully for us, Argiope spiders often build “stabilimenta” in their webs. Stabilimenta are the very noticeable zig-zagging clusters of bright white webbing usually appearing directly around the center of the web, a trademark of the Argiope genus. Garden spider webs are truly some of the most beautiful and complex around.

It is a hard sell to convince most people of the beauty and awe found within the ranks of spiders. Between their spindly octo-legs and venomous fangs, I can understand the trepidation. However, if you can find the courage to look beyond first impressions, you will find a world of tiny predators that are not only crucial to our ecosystem balance, but also amazing in their adaptations and methods.

So next time you are trail side picking webs from your hair, mumbling about the annoyance of it all, think of the now displaced humble insect-trapper having to rebuild its home. Better still, maybe even consider stepping underneath if you are lucky enough to catch a web before your hair does!

Jake Gamble is the Stewardship Manager for Red-tail Land Conservancy. Impassioned by land conservation, he strives to protect and preserve the natural quality of Indiana while inspiring others to do the same.