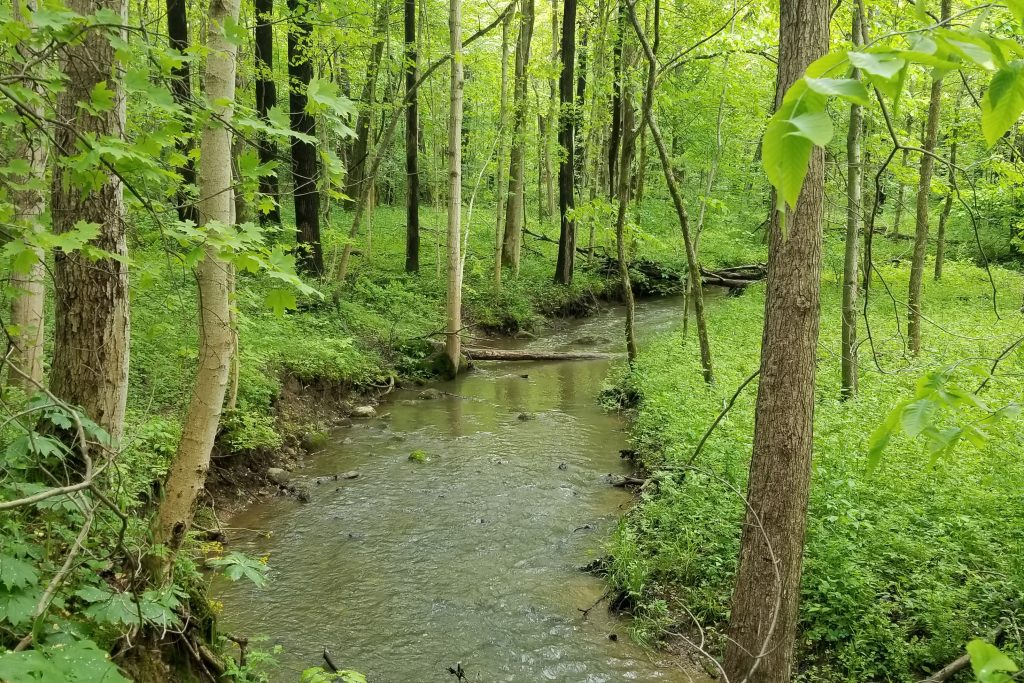 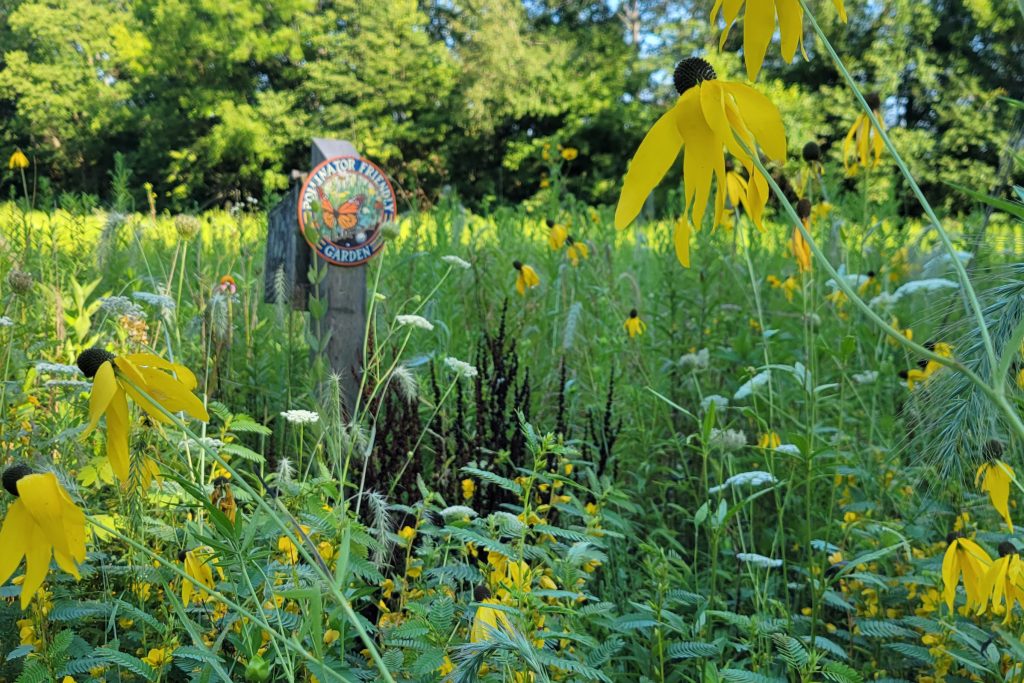 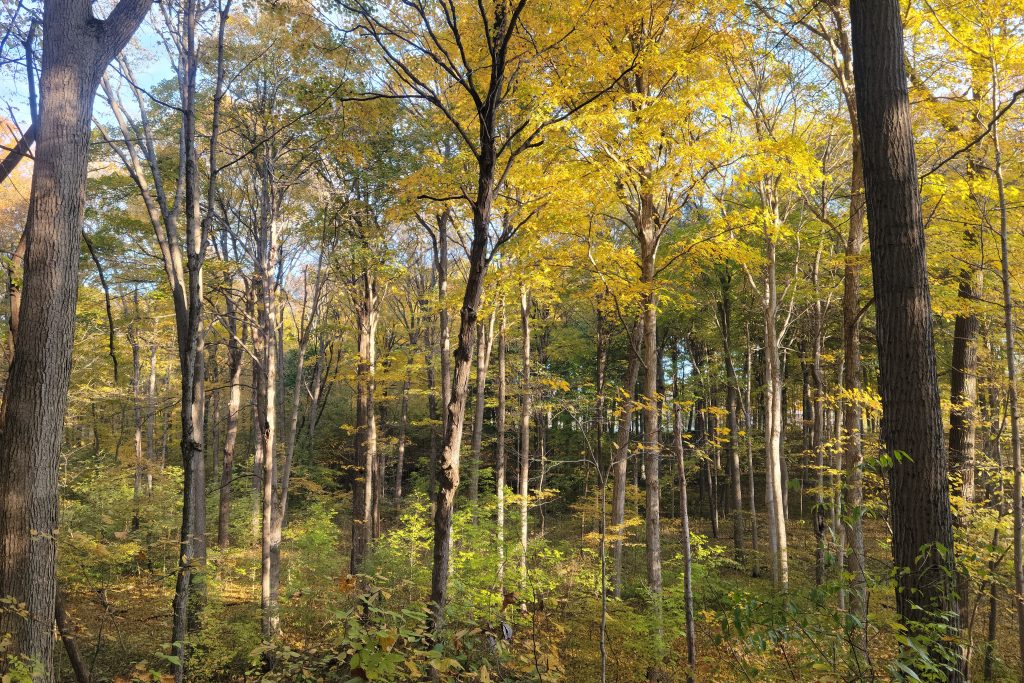 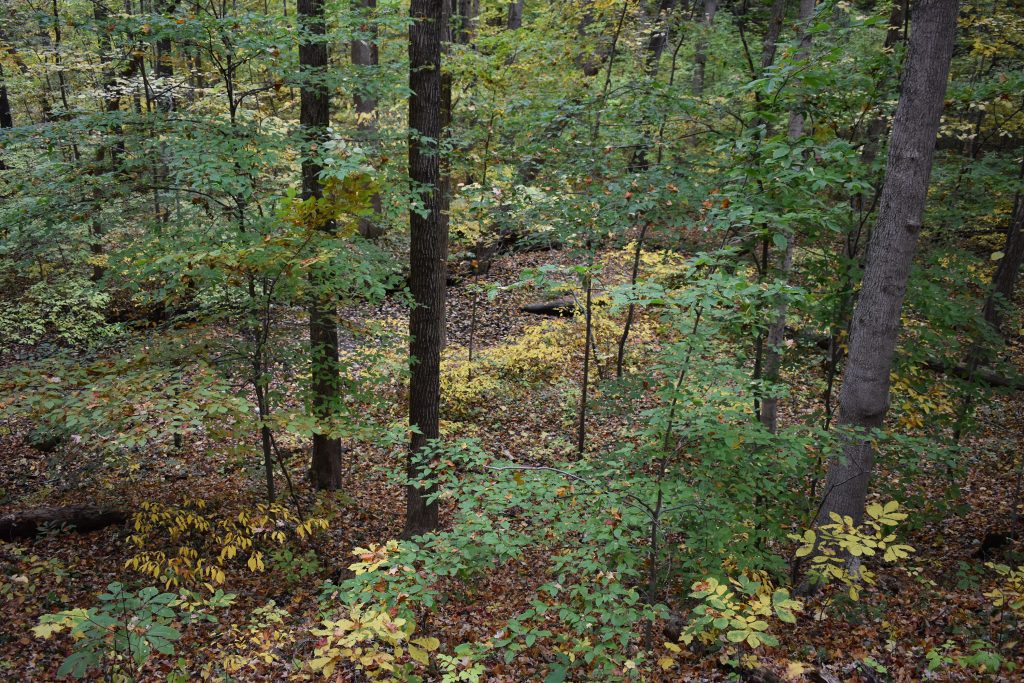 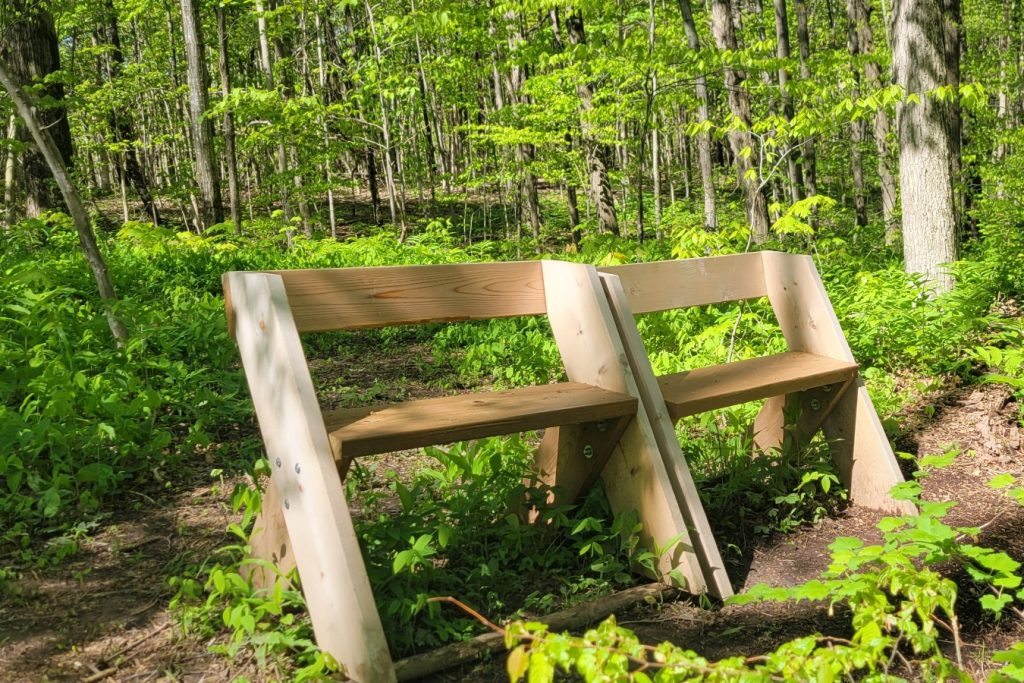 The loop trail at Fall Creek Woods winds through Smith-Crisler state dedicated nature preserve. It features massive trees, steep bluffs, and a wandering creek. Visitors can experience many stages of growth of an Indiana forest, from young trees to towering ancients. The diverse landscape provides a more challenging hike. Enjoy the view from a bench overlooking a glacially-carved bluff and soak in the beauty of the woods. A large stand of maple trees makes this a dazzling autumn destination. In the summer, a colorful prairie next to the parking lot attracts birds and butterflies.

History of the Smith-Crisler Nature Preserve

In 1831, the land was first purchased by a European immigrant named John Bonham. It was passed through his family until 1869 when his descendants sold the north 20 acres to Joseph Weeks. Later, in 1871, Joseph purchased the south 40 acres creating what is now the Smith-Crisler Nature Preserve.

A young Joseph Weeks emigrated from New York state to east central Indiana with his family around 1835 and became a medio-physical doctor in 1859. Around the same time as the Weeks, Lewis Swain and his family arrived in Indiana from Tennessee in 1831. Lewis and his brother were the original land grant owners of part of the land now preserved. These two families were joined together when Lewis’ daughter, Susannah Swain, married Joseph Weeks.

Joseph and Susannah’s youngest daughter, Emily Swain, inherited the entire acreage after the deaths of her father and surviving sister, Sarah Ann. Their other sister, Elizabeth Weeks, became a medio-physical doctor like her father. She died in 1903.

Emily Swain authored, History of Mechanicsburg which was published in 1907. She lived in the family home in Mechanicsburg and managed the property until her death in 1937. A fire destroyed most of the house she lived in, but was rebuilt and inhabited by tenant farmers for many years after. A family named Forney were long-time tenants.

Upon her death, Emily’s niece, Lulu Huston Smith inherited the property along with her brother Howard Huston. Lulu bought Howard’s interest and became sole owner. She and her husband Walter Smith, managed the property into the 1960s. They kept dairy and beef cattle, hogs, and horses. Walter kept a large vegetable garden in the 1940s and 1950s.

In the 1960s, Walter and Lulu deeded the entire farm to their daughter, Alice Smith Crisler. With the aid of her husband, Merval Crisler, she managed the farm until her death in 2007.

In the early 1950s, Merv and Alice started the A&M Store, a family clothing store, in the Meadowbrook Shopping Center in Anderson. Suburban shops were new at the time and the A&M Store was successful for a number of years in that location. In the 1970s, Alice proudly opened her own similar store in Chesterfield.

The farm became their hobby. Alice and Merv would drive down nearly every evening to see it and feed the many cats that  lived there. “A trip to the farm was always in my plans when I visited,” recalled their niece, Alice Kreissler. “Picnics and Thanksgiving dinners were prepared there.”

During most of those years, no one lived at the farm house. As time went on, Alice and Merv’s visits became fewer. The frequency of visits truly deteriorated when Alice was severely injured after a fall. Later, there were two break-ins and a number of family antiques were stolen.

In the 1960s, Alice and Merv unsuccessfully tried to stop the housing development to the south and southwest of their farm house. The drainage from those houses caused much trouble for the farm. To help alleviate the issues, Alice dredged from the barn to Fall Creek multiple times.

Their farm’s house and barn were built before the civil war and by the 1990s the barn was unstable. Alice hired a contractor to save the barn from collapsing and a new owner rebuilt the barn into a house.

Her niece fondly remembers Alice for her gritty determination and a sharp mind even when several physical ailments tried to slow her down. She overcame several attempts by nearby residents to encroach on her property. Alice Louise Smith Crisler passed away at 93.

After her passing, her niece and nephews, Alice Kreissler, Edward Wilkinson, and Donald Wilkinson inherited the property in 2007. “Although we loved the farm and spent lots of time there while growing up, it became evident we could not give it the time and care it needed,” said Alice.

In 2009, the 40-acre Smith-Crisler State Dedicated Nature Preserve in Henry County, Indiana was memorialized by Alice Kreissler, Donald Wilkinson, and Edward Wilkinson in honor of their grandparents Lulu and Walter Smith, aunt and uncle Alice Louise Smith Crisler and Merval Lynn Crisler, and the Swain and Weeks families. The land loved and treasured by generations will be protected forever by Red-tail Land Conservancy.

Thank you to Alice Kreissler, Edward Wilkinson, and Donald Wilkinson for providing the memories and history to write this memorial.