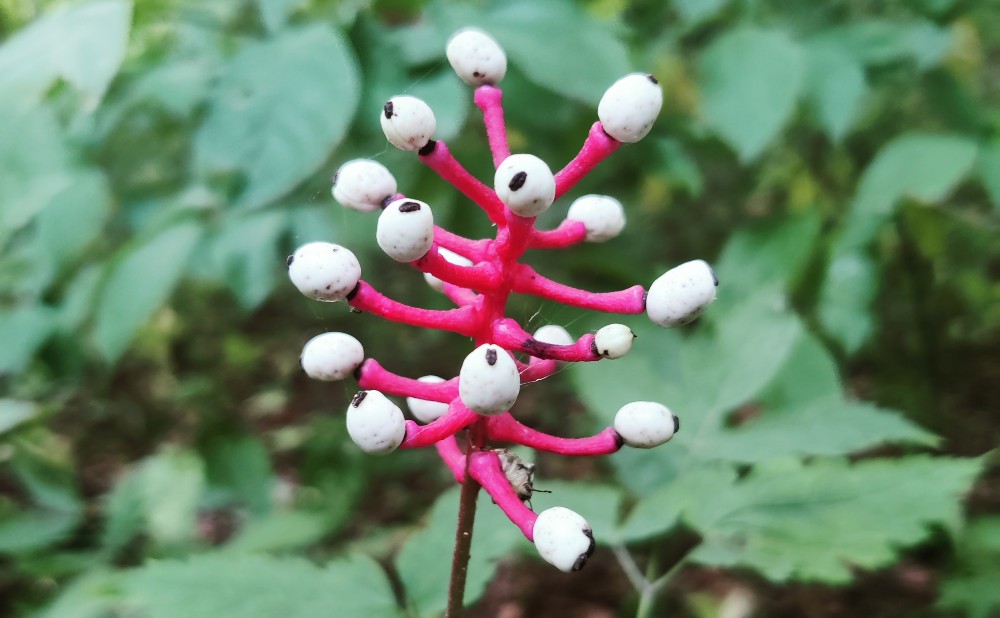 Before autumn’s paintbrush dots the woods in bright shades of orange, red, and yellow, there’s a less dramatic color popping up in the woods.

Native vines, shrubs, and wildflowers are bearing small colorful berries. Their tiny fruits pack a nutritious, and for some, a poisonous punch.

It’s hard to miss these late-summer stars of the botany world. At a time when the woods have gone quiet of birdsong and are still mainly green, the brilliant colors and wildlife crowd that vines and shrubs draw make these plants stand out.

Gray dogwood (Cornus racemosa) shrubs grow quickly in both sun and shade. Spreading by  underground roots, they form dense thickets at the edge of woods and in fields. In the spring, their white flowers attract busy pollinators. Many moths and butterflies use gray dogwood as a host plant for their eggs.

The dense thicket created by the rapidly spreading shrubs also provides cover for wildlife and nesting spots. The pollinating insects and caterpillars provide easy meals for nesting birds. In fall, gray dogwood produces white berries on red stems. These fruits are gobbled up quickly by local and migrating wildlife. While not toxic to people, the berries are quite bitter and not edible.

Once the berries are gone they aren’t finished being useful as cover for animals. The gray dogwood’s leaves turn a beautiful reddish purple in fall. Observing a thicket of dogwoods is a great way to see and hear wildlife.

Pokeweed (Phytolacca americana) grows like a weed. Thriving in marginal soils, it reaches 4-6 feet tall in fencerows, cleared fields, and other disturbed places. The dark purple berries grow in clusters on magenta stems and are devoured by local and migrating birds.

They are often mistaken for wild grapes by people. Poison control centers receive several calls each year about children who have eaten the colorful berries. Ingesting the fruit can cause severe stomach pains, nausea, vomiting, and diarrhea. They are also toxic to dogs and livestock.

Early settlers used pokeberry juice as a natural dye, writing ink, and to treat rheumatism.  Research from the University of Minnesota and University of California-San Diego has found chemicals from the pokeberry show promise as a treatment for cancer and HIV.

Doll’s Eyes (Actaea pachypoda), also commonly known as white baneberry, is a pretty, native woodland flowering plant that grows in high quality woodlands. In late May and early June, it has showy white flowers that stand on stalks above the plant. The real showstopper, and how it gets its name, are the white berries it produces. Set on red stalks, each berry has a dark purple pupil in the center, resembling miniature eyeballs.

Several species of birds and some smaller mammals eat the fruit and disperse the seeds. The frightful looking berries are even scarier if consumed.  Highly toxic, eating a few berries can cause cardiac arrest.

Foraging the woods for tasty bounty to eat is a growing trend. The colorful berries you find outdoors may look enticing, but leave them for the birds. Many are quite poisonous for large mammals like you and me.