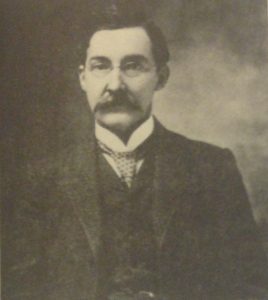 On your list of things to be thankful for, consider adding Charles Deam, especially if you enjoy the forests of Indiana.

So, who is Charles C Deam and why should we be thankful?

Deam, a self-taught scientist, became one of the foremost botanists in the country and the father of forestry in Indiana. This is an interesting story, the story of a man with a relentless work ethic and scientific curiosity. A man who recognized a problem and sounded the alarm about the destruction of Indiana’s environment in the early 20th century.

Charles grew up on the family farm a few miles outside of Bluffton, Indiana along the Wabash River. His father nurtured his early love of plants and taught him how to work hard, milking cows, splitting wood, and plowing fields. He walked five miles each way to school every day and sometimes 10 miles when the Wabash River flooded his route.

He saved his money and borrowed more from his uncle to attend DePauw University. The money ran out after his second year and he walked back to Bluffton where he worked on the farm, with a land surveyor, and in a drugstore. He eventually ended up owning a couple of drugstores in Bluffton when his non-stop work habits took a toll on his health. His physician advised him to go for walks in the country. A frugal person, Deam took the advice that he’d paid for to heart.

He began collecting plants on his walks and identifying them with botany texts. Soon his walks became adventures leading him all over North America and Latin America. During his lifetime he traveled all 1,016 townships in Indiana collecting over 78,000 plant specimens. He devoted himself to documenting all the vascular plants in Indiana and wrote 4 books. A man with no college diploma ended up honored with several university degrees.

In 1909, Charles Deam was named the first state forester of Indiana. As the state forester he doubled in size the newly established Clark State Forest, conducted experiments in forest reclamation, and the environmental needs of forests. Deam wrote the legislation that led to the Forest Classification Act of 1921. This act encouraged farmers to set aside land from production for forest.

Deam’s lasting legacy came from his observations on Indiana’s environment as he traveled the state to collect specimens. The early 1900’s were a time of great change in Indiana. Progress brought the axe, plow, fire, drainage, railroads and highways to the Indiana landscape.

Deam saw firsthand and then spoke out about the important biological changes that take place when forest is replaced with agricultural production. He raised concern about soil erosion in southern Indiana, grazing of forestland, and the effect of migrating non-native plants in the ecosystem.

His conservation philosophy was to leave the land in as nearly a natural condition as possible, consistent with a sensible and frugal use of its resources. Deam’s idea of encouraging a sustainable use of the land was quite novel 100 years ago. His work saved our forests from extinction, and his philosophy is even more critical today.

As we walk the woods this Thanksgiving week, join me in saying, “Thank you, Charles Deam.”