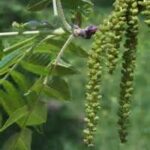 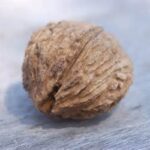 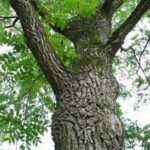 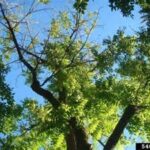 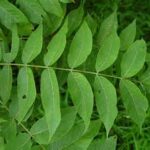 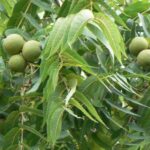 The black walnut is a large deciduous tree attaining heights of 30–40 m (98–130 ft). Under forest competition, it develops a tall, clear bole; the open-grown form has a short bole and broad crown. The bark is grey-black and deeply furrowed. The pith of the twigs contains air spaces. The leaves are alternate, 30–60 cm long, odd-pinnate with 15–23 leaflets, with the largest leaflets located in the center, 7–10 cm long and 2–3 cm broad. The male flowers are in drooping catkins 8–10 cm long, the female flowers are terminal, in clusters of two to five, ripening during the autumn into a fruit (nut) with a brownish-green, semi-fleshy husk and a brown, corrugated nut. The whole fruit, including the husk, falls in October; the seed is relatively small and very hard. The tree tends to crop more heavily in alternate years. Fruiting may begin when the tree is 4–6 years old, however large crops take 20 years. Total lifespan of J. nigra is about 130 years. 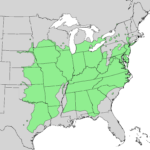 Black walnut is native to eastern North America. It grows mostly in riparian zones, from southern Ontario, west to southeast South Dakota, south toGeorgia, northern Florida and southwest to central Texas. Isolated wild trees in the upper Ottawa Valley may be an isolated native population or may have derived from planted trees. While its primary native region is the Midwest and east-central United States, the black walnut was introduced into Europe in 1629. It is cultivated there and in North America as a forest tree for its high-quality wood. More nuts are produced by open-grown trees. Black walnut is more resistant to frost than the English or Persian walnut, but thrives best in the warmer regions of fertile, lowland soils with high water tables. It is a light-demanding species. Where the range of J. nigra overlaps that of the Texas black walnut J. microcarpa, the two species sometimes interbreed, producing populations with characteristics intermediate between the two species.

Black walnut nuts are shelled commercially in the United States. The nutmeats provide a robust, distinctive, natural flavor and crunch as a food ingredient. Popular uses include ice cream, bakery goods and confections. Consumers include black walnuts in traditional treats, such as cakes, cookies, fudge, and pies, during the fall holiday season. The nuts’ nutritional profile leads to uses in other foods, such as salads, fish, pork, chicken, vegetables and pasta dishes.

Tapped in spring, the tree yields a sweet sap that can be drunk or concentrated into syrup or sugar

Black walnut drupes contain juglone (5-hydroxy-1,4-naphthoquinone), plumbagin (yellow quinone pigments), and tannin. These compounds cause walnuts to stain cars, sidewalks, porches, and patios, in addition to the hands of anyone attempting to shell them. The brownish-black dye was used by early settlers to dye hair. Extracts of the outer, soft part of the drupe are still used as a natural dye for handicrafts. The tannins present in walnuts act as a mordant, aiding in the dyeing process, and are usable as a dark ink or wood stain.

J. nigra is also grown as a specimen ornamental tree in parks and large gardens, growing to 30 m (98 ft) tall by 20 m (66 ft) broad. It has gained the Royal Horticultural Society’s Award of Garden Merit. 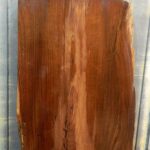 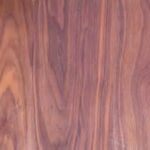 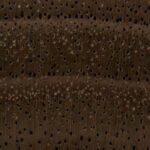