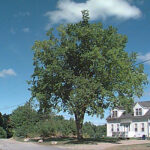 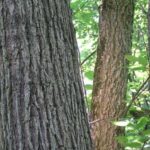 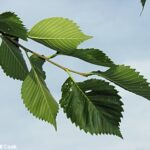 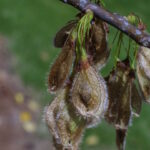 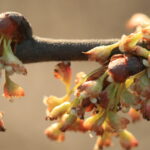 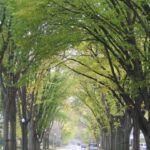 Native to North America, it  lives from Nova Scotia west to Alberta and Montana, and south to Florida and central Texas. The American elm is an extremely hardy tree that can withstand winter temperatures as low as −42 °C (−44 °F). 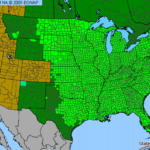 The American elm occurs naturally in an assortment of habitats, most notably rich bottomlands, floodplains, stream banks, and swampy ground, although it also often thrives on hillsides, uplands and other well-drained soils. On more elevated terrain, as in the Appalachian Mountains, it is most often found along rivers. The species’ wind-dispersed seeds enable it to spread rapidly as suitable areas of habitat become available.

The American elm is a deciduous tree, which, before the advent of Dutch elm disease, commonly grew to > 30 m (100 ft) tall with a trunk > 1.2 m (4 ft) d.b.h. The crown forms a high, spreading canopy with open air space beneath. The leaves are alternate, 7–20 cm long, with double-serrate margins and an oblique base. The tree is hermaphroditic, having perfect flowers, (i.e. with both male and female parts) and is therefore capable of self-pollination. The flowers are small, purple-brown, and, being wind-pollinated, are apetalous; they emerge in early spring before the leaves. The fruit is a flat samara 2 cm long and 1.5 cm broad, with a circular wing surrounding the single 4–5 mm seed. As in the closely related European white elm (Ulmus laevis), the flowers and seeds are borne on 1–3 cm long stems. American Elm is wholly insensitive to daylight length (photoperiod), and will continue to grow well into autumn until injured by frost.

Dutch elm disease (DED) is a fungal disease which has ravaged the American elm, causing catastrophic die-offs in cities across the range. It has been estimated that only approximately 1 in 100,000 American elm trees is DED-tolerant, most known survivors simply having escaped exposure to the disease. However, in some areas still not populated by the Dutch elm disease-carrying elm bark beetle, the American elm continues to thrive, notably in Florida, most of Alberta and British Columbia.

The American elm is particularly susceptible to disease because the period of infection often coincides with the period, approximately 30 days, of rapid terminal growth when new springwood vessels are fully functional. Spores introduced outside of this period remain largely static within the xylem and are thus relatively ineffective.

A fair number of mostly small to medium-sized American elms survive nowadays in woodlands, suburban areas, and occasionally cities, where most often the survivors had been relatively isolated from other elms and thus spared a severe exposure to the fungus. For example, in Central Park and Tompkins Square Park in New York City, stands of several large elms originally planted by Frederick Law Olmsted survive because of their isolation from neighboring areas in New York where there had been heavy mortality. The Olmstead designed park system in Buffalo, NY  did not fare as well. In Akron, Ohio there is a very old elm tree that has not been infected. In historical areas of Philadelphia, Pennsylvania, there are also a few mature American elms still standing — notably in Independence Square and the Quadrangle at the University of Pennsylvania, and also at the nearby campuses of Haverford College, Swarthmore College, and The Pennsylvania State University, believed to be the largest remaining stand in the country. There are several large American Elm trees in western Massachusetts. The large Massachusetts Champion Elm stands on Summer Street in the Berkshire County town of Lanesborough, Massachusetts has been kept alive by antifungal treatments. Rutgers University has preserved 55 mature elms on and in the vicinity of Voorhees Mall on the College Avenue Campus in New Brunswick, New Jersey in addition to seven disease-resistant trees that have been planted in this area of the campus in recent years.

The largest surviving urban forest of American elms in North America is believed to be in the city of Winnipeg, Canada, where close to 200,000 elms remain. The city of Winnipeg spends $3M annually to aggressively combat the disease utilizing Dursban Turf and the Dutch Trig vaccine, losing 1500-4000 trees per year.

The American elm’s biology in some ways has helped to spare it from obliteration by the Dutch elm disease, in contrast to what happened to the American chestnut with the chestnut blight. The elm’s seeds are largely wind-dispersed, and the tree grows quickly and begins bearing seeds at a young age. It grows well along roads or railroad tracks, and in abandoned lots and other disturbed areas, where it is highly tolerant of most stress factors. Elms have been able to survive and to reproduce in areas where the disease had eliminated old trees, although most of these young elms eventually succumb to the disease at a relatively young age. There is some reason to hope that these elms will preserve the genetic diversity of the original population, and that they eventually will hybridize with DED-resistant varieties that are being developed or that occur naturally.

Some cities such as Kansas City, Missouri, had used mostly American elms in planting its city streets and had had some of the finest shaded residential streets in the nation, until the disease almost obliterated these plantings in the late 1960s and early 1970s. Many cities in the United States still have some surviving American elms, but generally this species requires frequent attention to check for elm bark beetles and DED infection. (The National Park Service often checks on the hundreds of elm trees under its care on the National Mall and in other locations in theWashington, D.C., area for signs of illness.)

Fungicidal injections can be administered by a qualified arborist to valuable American elms, to prevent the trees’ becoming infected. Such injections generally are effective as a preventive measure for up to three years when performed before any symptoms have appeared, but they may be ineffective as a treatment once the disease is able to be seen. 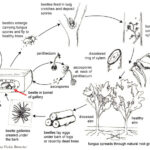 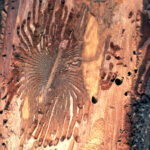 The Treaty Elm, Philadelphia, Pennsylvania. In what is now Penn Treaty Park, the founder of Pennsylvania, William Penn, is said to have entered into a treaty of peace in 1683 with the native Lenape Turtle Clan under a picturesque elm tree immortalized in a painting by Benjamin West. West made the tree, already a local landmark, famous by incorporating it into his painting after hearing legends (of unknown veracity) about the tree being the location of the treaty. No documentary evidence exists of any treaty Penn signed beneath a particular tree. On March 6, 1810 a great storm blew the tree down. Measurements taken at the time showed it to have a circumference of 24 feet (7.3 m), and its age was estimated to be 280 years. Wood from the tree was made into furniture, canes, walking sticks and various trinkets that Philadelphians kept as relics.

The Washington Elm, Cambridge, Massachusetts. George Washington is said to have taken command of the American Continental Army under the Washington Elm in Cambridge on July 3, 1775. The tree survived until the 1920s and “was thought to be a survivor of the primeval forest”. In 1872, a large branch fell from it and was used to construct a pulpit for a nearby church. The tree, an American white elm, became a celebrated attraction, with its own plaque, a fence constructed around it and a road moved in order to help preserve it. The tree was cut down (or fell — sources differ) in October 1920 after an expert determined it was dead. The city of Cambridge had plans for it to be “carefully cut up and a piece sent to each state of the country and to the District of Columbia and Alaska,” according to The Harvard Crimson. As late as the early 1930s, garden shops advertised that they had cuttings of the tree for sale, although the accuracy of the claims has been doubted. A Harvard “professor of plant anatomy” examined the tree rings days after the tree was felled and pronounced it between 204 and 210 years old, making it at most 62 years old when Washington took command of the troops at Cambridge. The tree would have been a little more than two feet in diameter (at 30 inches above ground) in 1773. In 1896, an alumnus of the University of Washington, obtained a rooted cutting of the Cambridge tree and sent it to Professor Edmund Meany at the university. The cutting was planted, cuttings were then taken from it, including one planted on February 18, 1932, the 200th anniversary of the birth of George Washington, for whom Washington state is named. That tree remains on the campus of the Washington State Capitol. Just to the west of the tree is a small elm from a cutting made in 1979.

The Liberty Tree, an elm on Boston Common in Boston, Massachusetts, was a rallying point for the growing resistance to the rule of England over the American colonies.

George Washington’s Elm, Washington, D.C. George Washington supposedly had a favorite spot under an elm tree near the United States Capitol Building from which he would watch construction of the building. The elm stood near the Senate wing of the Capitol building until 1948

The Logan Elm that stood near Circleville, Ohio, was one of the largest American elms anywhere. The 65-foot-tall (20 m) tree had a trunk circumference of 24 feet (7.3 m) and a crown spread of 180 feet (55 m). Weakened by Dutch elm disease, the tree died in 1964 from storm damage.The Logan Elm State Memorial commemorates the site and preserves various associated markers and monuments.

According to tradition, Chief Logan of the Mingo tribe delivered a passionate speech at a peace-treaty meeting under this elm in 1774, said to be the most famous speech ever given by a Native American.